Living the high life in France… on a boat La vie est belle, particularly when you’re sailing through France. Enjoying a splendid local French wine on the sunny deck. Charming towns, small locks and about 8,500 kilometres of waterways. That is France through and through. So it’s hardly surprising that France is the perfect destination for almost all boaters. Mike Gardner-Roberts, Linssen Yachts dealer in Auxerre in Burgundy, is aware of that too. As a young Britisher, he decided to spend a year sailing through France. And he stayed.

“When I was thirty, I was working in insurance in London”, Mike begins. “At a certain point, I asked myself whether I wanted to be doing this for the next thirty years. The answer was ‘no’.” His wife had also had enough of life in London. They sold their house and went to live on a boat. In the holidays, they went to France where they hired a vessel. They were hooked. Wouldn’t it be great to spend a year sailing through la douce France on their own boat. That was still a possibility as there were no children.

Living on the boat

“So in 1998 we departed for France and experienced a fantastic voyage. In the end, we lived and worked on the Canal du Midi for five years. I was a crew member and later captain and hotel manager on a high-class hotel boat for Americans. This work means being available 24/7 and you are often away from home. That’s not so handy if you have children, so when my wife fell pregnant, I stopped doing this work. So I had to look for a job in a ‘normal’ hotel. But I really wanted to stay in the boat business.”
Easy choice
In 1993, Mike bought boat hire company France Afloat in the Midi. He rented out comfortable steel boats that were made in the UK. “After some time, people were asking me where they could buy such a boat. So I started selling them myself.” In 2007, he was called by the then importer for the UK and France, asking whether he could drop by in the Midi. “It turned out that he was in a telephone box next to my business”, says Mike laughing. “The same afternoon, I was asked whether I would like to become an agent for Linssen Yachts in France. I didn’t need to think about it for long. It’s a bit like asking whether you would like to sell Rolls Royces.”

In 2012, he also took over the Aquarelle France agency in Auxerre, Burgundy. Former owner Paul van der Mye had already retired. This move meant that Mike became a Linssen Yachts representative for the whole of France, with branches in Capestang on the Canal du Midi and Auxerre on the Canal du Nivernais. He runs the business together with his wife, sister and brother-in-law Steve Adams. In Auxerre they manage the marina, sell new and second-hand boats, hire boats and berths, carry out maintenance and house about ninety boats during the winter lay-up. Customers come from all over the world. “Speaking English is a great advantage”, explains Mike. “It’s far easier than French for many people.”

Mike is, however, fluent in French. “Learning the language is one of the conditions for integrating in a country”, he says. “It’s also important to embrace the customs and the culture.” He has been completely absorbed as a Britisher into the French community. He was even elected to the town council. What does he miss the most in France? “That typical British sense of humour, which is why I occasionally watch UK TV channels, so that I can get my dose of humour. There’s nothing better than a good laugh.” Sailing is in Mike’s blood and he really enjoys his work. During the few holidays that he has, he can often be found on the water. He frequently sails from one place to another to deliver a boat. “I find the great thing about sailing is the calmness. Watching the world go by from the water at a gentle pace. It’s rather like moving around a country via its gardens, while passing through charming towns and harbours. Sailing on the open sea surrounded only by water does not appeal to me.”
What will Mike be doing ten years from now? “I will then be 70 and I hope that I will have retired. But I would like to stay involved with Linssen Yachts. I would like to go and live on a boat again, and preferably a Grand Sturdy 40. That’s a boat with which you can do anything: sailing on all waterways and living on board for a long time. Yes, the 40 is part of my master plan.”

Auxerre is the place to be

Auxerre is the Linssen centre of France. It is a splendid place with a marina in the heart of the old town centre opposite the gothic Cathédrale Saint-Étienne.
Auxerre is rich in art and history and there are many medieval attractions. The winding streets are characterised by well-preserved half-timbered houses. Needless to say, there are plenty of convivial pavement cafés where you can drink a refreshing Chablis. The vineyards where this wine is produced are about twenty kilometres away.

The town is located on the River Yonne and at the start of the Canal du Nivernais, which has 116 locks. It is the second most popular sailing destination in France after the Canal du Midi. Burgundy has about one thousand kilometres of waterways, so there are plenty of sailing opportunities. The waterway network throughout France is fantastic. The Mediterranean, the Atlantic Ocean, the North Sea and the Channel are all easily accessible by boat.
Auxerre can also be reached easily by road, rail or air. It is centrally located in France. Paris can be reached by road within two hours and the South of France and the Netherlands within six hours. 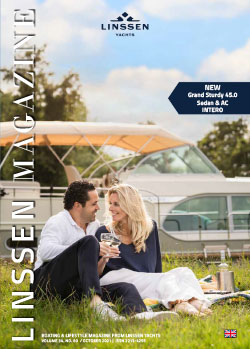 One of the most relaxing displacement cruisers

“With this all-new boat, Linssen’s pursuit of refinement has reached new levels of excellence,
enabling the yard to produce one of the most relaxing displacement cruisers that we’ve ever tested in some time”

“Even reversing is easy”

“The saloon can be converted into an open-air arena” May 2021 ISSUE
The Linssen Magazine is published 2x a year. You can download your copy here.

In the Linssen webshop you can choose from very comfortable polo shirts, good-quality jackets, caps and a great travel bag. They are, of course, products that suit us and you with good wearing comfort and the quality you are used to from us.

For use on board, we have navigation charts, the Linssen pennant and sets of bath and hand towels.

What to discover with/on your Linssen